When to Hire a Female Motivational Speaker 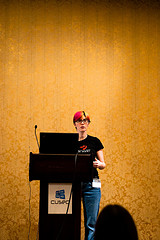 I recently got a call from a company who was looking to hire a motivational speaker. The current stumbling block was deciding whether this speaker should be male or female.

Apparently the convention planning committee was split: half wanted to hire a female motivational speaker and the rest thought a male would be more appropriate.

The reason for the stalemate is that they have had both good and unfortunate experiences with both genders. The convention planning committee also happens to be 50% male and 50% female, another fly in the ointment.

However, they had hired mostly male motivational speakers in the past and they felt like they needed a feminine touch.

Below is the thought process I would go through to decide whether to hire a male or female motivational speakers.  Consider:

What is the audience gender break down? There are no hard and fast rules, however if you have a primarily female audience, make sure your agenda has a good balance of female speakers. If I am speaking for a group of women I incorporate different content. Woman love to talk about relationships, family and connection so I will use more humor and examples from this perspective.

When I speak for primarily male audiences, I find they like to be a part of the motivational speech so I engage them through humorous interaction, possibly poking fun at certain "safe" people. I also layer in more audience specific content.

I have also seen the opposite to be true; where a female motivational speakers message is entirely content driven and male speakers who engage through relationship stories and humor.

If anything, it is important to balance your agenda to incorporate both male and female motivational speakers, especially over the long term.

Female motivational speakers use more humor about topics like family and relationships . Studies show that in groups, women laugh more than men. Therefore, primarily female audiences may be more primed for laughter, so hire a funny motivational speaker.

When it comes to humor, men do a lot more poking fun and find humor with a touch of sarcasm funny.  It all depends on what would go over better with your audience.

I once spoke for a sales conference where they usually only hire female motivational speakers. It was an all male audience who typically sold products to women. The executive believed that hiring female speakers helped these male sales professionals to better connect with women.

Apparently there are a lot more male speakers than female inspirational speakers....  Why is this?  Any thoughts?

I had the pleasure of watching Judy Croon speak at a Public Service Event. The female motivational speaker and stand- up comedian presented a hilarious speech, Relieving Work-Related Stress with Humor.

Judy clearly has a real knack for comedy, her humorous punchlines had the audience rolling in the aisles.

She has been the opening act for many celebrities including; Joan Rivers, John Stewart, Lewis Black and Robert Klein. Her specials have appeared on NBC, CBS, CTV and The Comedy Network. Judy has co-hosted morning radio shows on Toronto’s Mix 99.9 and LA’s KFRG

Judy is the creator and host of  “Laughlines” and “Stand Up for The Girls” which have raised over $650,000 for breast cancer research.

Judy talks about how comedy is a great tool because when we laugh we relax when we relax we learn. The public service employees really needed the humor as the content in this event was overwhelming. I love watching a funny motivational speaker perform because its a really different experience. Watching an audience laugh really connects them, helps them relax and learning and retention are far greater.

Like Judy says, Just when everyone is sticking toothpicks in their eyes- WHAM- hit them with a punchline. Especially, nowadays..people are so freaked about EVERYTHING.
Hey if you're going to pee your pants, do it from laughter, not from fear.

In her speech, Judy outlines how humor helps decrease stress and negative emotion. She cites a Harvard study that says our grey matter shrinks and we can make bad decisions.
She says one minute of anger can weaken the immune system by five hours. Yet, positive people can live upward of 10 years longer.

Judy recently co- produced a book, From the Stage to the Page, Life Lessons from Four Funny Ladies. The book is written by Judy Croon, Meg Soper, Judy Suke and Susan Stewart. From Four different perspective they cover the topic of humor, laughter and play all from a positive insightful and funny perspective.

If you need more Joy in your life, you need this book! Get it Here.