Is Technology making us Rude? 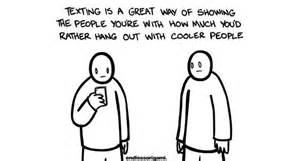 Many complain about being ignored and disregarded by someone who is absorbed in their smartphone or other technology. It begs the question, does technology make us rude?

Three out of Five people say someone is rude to them on social media. Studies show people are ruder online versus face to face.

My thought is, technology and social media are not making us rude, it just makes it less transparent to be rude. Social media networks like twitter or facebook offer a forum where we can communicate relatively uncensored, whenever we want, to whomever we want. Many people take the bate and get accustomed to sharing with people things they have no business saying online.

Add to this; you can maintain certain anonymity online and give yourself the liberty to say things you would never have the guts to say in public.

It's easier to attack others, including the government, online. We don't have to back up our proclamations, and we have the freedom to say what we want. Sometimes online forums can encourage or set the tone for offensive attacks or negative commentary, which sets people up to participate with an attitude of animosity.

Technology is an avenue to be rude. Also, it reinforces a host of abusive behaviors that allow us to hide behind our devices, ignore others,  and disengage from the real world. Many people like to jump on the bandwagon and add divisive comments to videos, reviews, Facebook posts and more. Technology provides a forum that is socially acceptable to express your negative opinions. Online forums encourage participation where negative people get rewarded for expressing their views.

Advertisers have known for years that people are most interested in reading negative or critical information. People love to hear about other people's problems; maybe it helps them feel better about their own lives.

I remember observing people at an airport newsstand. Two magazines sat side by side; one had a feature article about Brad Pit having an affair, the other magazine featured a story about a dog that rescued a blind girl. I had a four-hour flight delay and lots of time to watch as over and over again people drawn to the drama and conflict of Brad Pits life. Negative information is provocative and draws people in, social media formats help to intensify it.

Add to this, technology increases our level of multitasking and decreases attention span. Over the last 30 years, our average attention span( the length of time a person can sit and pay attention) has decreased from 22 minutes to 8 seconds! Thus people are too distracted to pay attention to the detail. They would rather skim information and focus on the dramatic value of the information.

However, my feeling is if you are rude already, social media and technology are just tools to amplify your rudeness. If you are a kind, respectful and caring person, this should not change no matter what venue you chose to communicate with.

Funny Motivational speaker keynote, I Love My Job, it's the People I Can't Stand!