Acknowledge People without Turning Them Off

Does acknowledging your employees compel them to explore their potential further or is it more of a mindless clacking of cliche expressions? Is your recognition program a superficial ploy encroaching on your staff’s need to be candidly recognized and inspired? Don’t be disheartened because many organizations suffer the same twisted fate. Employee morale boosters hinge on how well leaders recognize staff. Everybody likes to be appreciated for their efforts, but only if they are rewarded and acknowledged in a way that is genuine.

Include employees’ say in the way you salute their efforts. Most companies have a formal way of acknowledging employees with annual award banquets, including keynote speakers with motivational speeches, top sales awards and certificates. If your award program doesn’t invite a thunderous reception, it may be because it's too generic and not an inspiration.

There are some major pitfalls to generic leadership award programs:

Why are formal award systems so popular as a leadership strategy then? The main advantage to formal awards is that they are easy to administer. All you need to do is calculate how close (or how far) people get to their goal, find the “top achievers” and acknowledge them with your standard reward.

Formal award systems recognize one narrow aspect of the job (such as increased revenue, morale, sales or productivity) and those few employees who are good at achieving that goal. By contrast, informal recognition programs focus on spontaneous and personal appreciation of employee efforts.

THE ART OF APPRECIATING OTHERS

Appreciating others is a brilliant and creative act. Leadership strategy needs to notice and nurture consistent acts of achievement. Yet many leaders don’t consider showing appreciation a part of their leadership skills. Other leaders realize that acknowledgment is important, but they botch the process. Spouting hollow praise too often will bring discouraging results.

There is an art to showing appreciation for others. Employees won’t be impressed by trite and generic compliments. Most leadership could use a bit of practice with thoughtful acknowledgments. Possibly a leadership seminar or workshop with a motivational talk to practice the keys to a good acknowledgement. According to B.F. Skinner, a good acknowledgment has four qualities. It is consistently:

I would add to this always link individual performance to the overall good of the group. Here is an example: “Mike, congratulations on how you handled that difficult patient just now. He was nasty and not about to give up, but you sympathized, calmed him down and set him straight.” This acknowledgment is specific, immediate, personal, and spontaneous.

Next, link individual performance to the good of the group. “Your taking the time to explain things to that patient builds understanding and agreement and makes that patient so much easier for the rest of the team to deal with.”

According to a study done by Robert Half International Limited, a lack of praise and recognition is one of the primary reasons why employees leave their jobs.

Increasing the say factor in your organization means increasing employee input to their jobs. Leadership motivational speeches should reward people individually and in a personalized way for their accomplishments instead of generally addressing the whole group for its performance level. Take time to find out what specifically motivates each of your employees and then see what you can do to make those things happen. How do you find out what motivates others? Ask them.

Increase the say factor in the job by getting people talking about what inspires and motivates them and engage them in the reward process. When people get rewarded in the way they want, they will be much more satisfied. Involvement equals commitment. The best management is what you do with others, not to them. 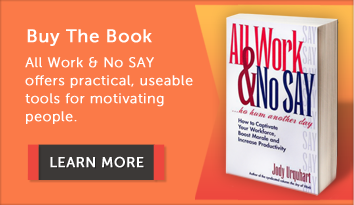