3 things to Expect from a Difficult Boss 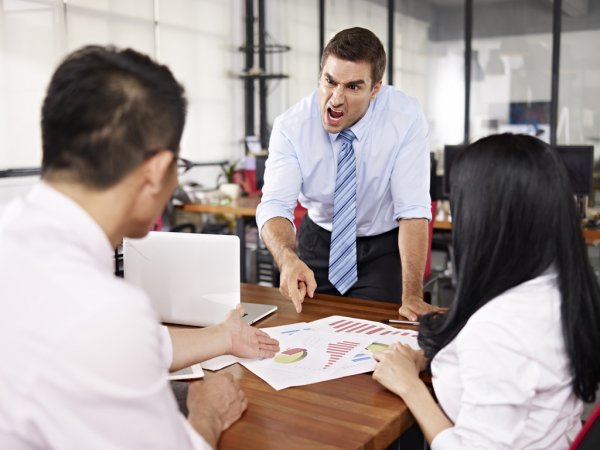 Craig is an emotional tyrant.

His rants are sudden and abrupt. They are disturbing. It makes people that work for him confused and scared. The trouble is they work. Craig loses control, and he gets what he wants. We all fall in line.  Out of fear, we go along.

We salute him; we give him our attention, we do what he wants even If it doesn’t make sense.

Sometimes his rants have no real point. So why bother? Because it gets him what he wants. It gets him attention.

I worked for Craig over 20 years ago.

It’s a relief to no longer be the bullseye to his evil rants. It was a lot of pressure. However, I still remember the toll it took on me. For years I would cower in fear. I learned to be a people pleaser to sideswipe his wrath. It was just easier to please him, give in and give him what he wanted.

If I knew then what I know now.

Craig has a particular personality style that gets him results. It’s an angry aggressiveness that people cower to, and it works. Once I recognized this, I had much more control. I stopped doing what he wanted. I stopped listening.

It helps to know someone else’s anger is not about you. You don’t have to take it on. You didn’t do anything wrong (Unless you did.) In my case, I refused to be subservient. I refused to listen, and he fired me.  I wasn’t willing to put up with it.

Instead, know what you can expect from a bad boss so you can understand how it impacts you and your team. It will make it a little easier to stomach his dysfunctional patterns.

Once you see the patterns, you can carve out work relationships that don’t confine you in fear. Or you may learn to ignore behaviours that limit you.

What to expect from a demanding boss:

People lash out for a reason.

Know these outbursts are mostly about them and not about you. This knowledge gives you control. It helps you stay objective. You can do what’s necessary, instead of cowering in fear and perpetuating the cycle. There are times when you will know anger isn’t warranted and talk to him about his tyranny. Stay calm and address the facts, let him understand how his passion impacts workplace morale. Over time you let difficult leaders know their leadership style is helping but hurting others.

Cutting people down makes some people feel better. Perhaps your leader suffers low self-esteem. Either way, the remarks don’t reflect on you; they illuminate weakness in him. Snide remarks have no place at work. A leader’s underhanded jabs are not appropriate so it may be best to say nothing at all. Don’t give him attention and he’ll change his approach. In the end, he’s the one who looks like a fool.

You can also try kindness. Don’t be swept away by anger. Instead, smother him with compassion. He’ll be confused and back off. Either way, you have learned to deal with a negative situation in a positive way.

Anger is a way to cope. When you put pressure on someone, conflicting emotions emerge. Difficult people have a pattern of taking their anger outwards, impacting morale. What you know is pressure brings out the pain, and challenging people take it out on others. When you know stress is building at work, you can be prepared for emotions to fire up and eventually settle. It’s a cycle. Again, it’s hard, but it’s usually not about you, it’s your leader’s way to cope. Knowing this helps you survive.

Working for inconsistent leaders is hard. I once told Craig, If your going to be a jerk, be a jerk all the time, at least I know what to expect. When a  managers role is ambiguous, it puts pressure on everyone. Leaders need to lead in a consistent way to be predictable. Help people know what’s expected of them.

Bad bosses don’t do this. They lead with emotion and punish people when they have a terrible day. Most managers haven’t had leadership training, so their leadership isn’t straightforward.

It’s hard to deal with inconsistent leadership. Of course, you need to understand and work through your own emotions.

Female Keynote Speaker​s​ program I Love My Job, it's the People I Can't Stand!

Be kind to yourself. He’s a jerk, and it’s not your fault. Next look for ways to create patterns of consistency. Ask for clarity. Usually, inconsistent leaders lack self-awareness, so help them see they aren’t clear.

If you have climbed outside yourself with us before you know you are not powerless at the hands of a bad boss. You know only you can let anger get the better of you.

Now it’s just about setting up some rules to let your lousy boss know your boundaries.